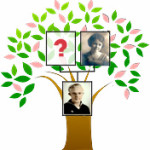 Who was my father’s father?

My father never knew his father. He was even unsure of his father’s name until he applied for a passport in the late 1960’s. This unknown man remained a mystery throughout my father’s life and continues to do so today.

My father, Alton Jackson Marshall, was born in Clinton, Oklahoma on 17 February 1925 to Lillian Florence (Howle) Marshall and a man whose name she stubbornly refused to reveal until forced to do so when my dad was in his mid-forties. It seems that his father’s identity had remained a mystery for so long because the scoundrel had abandoned his new family not long after my dad was born and never returned. Who was this man? Why did my grandmother refuse to even say his name?

As a child, I remember being a bit confused as to why I had two grandmothers and only one grandfather in my life. I asked my mother about this and she told me that she didn’t understand what had happened to this missing grandfather either. She also cautioned me not to ask my dad these questions and that I most definitely should not mention anything to my grandmother because it would be too painful for them. So, I didn’t ask and no one talked about that part of their lives.

Years passed and everyone’s lives went on until my parents decided to travel to Mexico City in 1969 and my dad applied for a passport. His birth certificate was no help because it only listed the surname, Marshall, with no given name for his father. In order to complete the passport application process, my grandmother had to tell my dad that the man she had married was Robert Lee Marshall. But she refused to say anything else about him. Sadly, my father died unexpectedly in 1984. Since my father never talked about his father, I can only surmise that he died knowing very little about the man.

Some of the story revealed

During a visit a few years after my dad’s death, Grandmother began sharing with me small bits of stories about this mystery man. She said that Robert “Bob” Marshall was a car salesman that she had married despite her mother’s advice. Not long after they were married, she began to suspect that she had made a huge mistake. Grandmother discovered that Bob owed money to many people in the community and had been forging checks. In order to evade arrest, he soon vanished; abandoning her and their unborn child. When the authorities came looking for him, she was shocked to learn that, in addition his other crimes, he was a bigamist with another wife and child somewhere in Texas. Since she had defied her family, Grandmother found herself alone and deep in debt. She spoke of the harsh realities she encountered as a single parent caring for her newborn son while trying to repay Bob’s debts. In 1928, she ultimately filed for and was granted a divorce retaining sole custody of my dad. In her own way, I believe that Grandmother spent the rest of her life protecting my dad and all of us from this man.

Although my dad and Grandmother Marshall have been gone for many years, I find myself wondering about this man. Who was he? Who were his parents? Finding answers to questions such as these prompted me to delve into my own family history. As I uncover records from the past, I hope to learn more about Robert Lee Marshall and his family.