When my paternal grandmother, Lillian Florence Howle, married Robert Lee Marshall, Jr. in Beckham County, Oklahoma, on 28 February 1924, she did not realize how profoundly he would change her life. In that first year of marriage, she would become pregnant and give birth to my father a mere eleven days before she and “Bob” would mark their first wedding anniversary. Whatever joy she experienced at the birth of her son was short lived when “Bob” abandoned them leaving behind many debts for which she was then responsible. When the authorities came looking for him, she would only then learn that, in addition to his other crimes, he was a bigamist with another wife and child in Texas. That was when she discovered that everything he had told her was a lie, even his name.

In 1928, she was financially able to file divorce proceedings against him. By then, she had learned that his real name was Don Sroufe. The court found in her favor and granted the final divorce decree on 30 April 1928. Figure 1 above shows the cover of this final decree in the matter of “Lillian Marshall, Plaintiff vs. R. L. Marshall, known as Don Sroufe, Defendant.” 1

A letter from jail

Just a couple of months after my grandmother was granted the divorce, she received a letter from her ex-husband. The letter was dated 13 June 1928 and postmarked from Wichita Falls, Texas. 2 The letter reads as follows:

Guess you will be somewhat surprised to hear from be but I would like some information about our divorce when it was granted. The day of the month month and year, if you will give me this information it will certainly be appreciated very much as it will save me considerable trouble. It seems that I can never get on the right road guess it was born in me more or less.

How are you and Sonny boy getting along fine I hope. Lillian I know that I deserve no consideration from you at all but,  I would like very much to have a picture of you and the baby just a small one if you have no other kind. I was in Grandfield [Oklahoma] one year while you was teaching there and tryed every way to just get to see you pass on the street but did not. And I did not want to call you for fear it would cause you embarrasment. How is your mother and Carleton getting along. Did Carleton and his wife ever go back together. Lillian, I sure hope you will give me these dates on the divorce that I ask you for, and I would also like very much to have you write me a letter telling me all about you and Sonny boy I will promise not to answer and molest you  in anyway with any more letters. But I am in jail here now and with these dates from you will save me lots of trouble and expense.

Lillian, if at any time that I can be of help to you, I will be more than glad to do so, even if I have not been the right kind in my past I have a heart left and a soft in it for you and Sonny Boy.

I was over to Hollis Okla about one month ago and went to Frank & Thelma Ansel, they sure dont look like their selves.

Hoping that this finds all of you well and doing fine, and that you will answer this by return mail.

As the letter indicates, he was in jail in Wichita Falls, Texas. However, he doesn’t tell my grandmother why he is in jail. He must have expected to remain in jail long enough to receive a reply from her since he asked grandmother to write to him there. The letter includes several apologies to her and excuses for his bad life choices. He never once used my dad’s given name and only referred to him as “Sonny Boy.” Knowing my Grandmother Marshall, she must have clenched her jaw and muttered her displeasure at his use of a pet name for her little boy. Finally, Bob (Don) is clearly aware that my grandmother had filed for a divorce because he asked her multiple times to inform him of the exact date of the final decree. Why would it be so important to him to know those dates?

One possible reason for his interest in that actual date might be explained by a small entry in The Anadarko (Oklahoma) Tribune in early January 1929. The article reported that a new record had been set for the number of marriage licenses issued in the month of December 1928 in Caddo County, Oklahoma. 3

Now I must pause here and explain that the source of this information is a transcription of a collection of original articles covering all marriages recorded in Caddo County in 1928. The transcript was completed by volunteers and is part of the Caddo County, Oklahoma OKGenWeb online resources collection hosted on Rootsweb. This source information is crucial in considering the credibility of the data because, in this case, it is actually a transcript of what a reporter copied from the original county record book. In other words, this marriage record could be considered a transcript of a transcript and sometimes the transcription process can innocently produce records that are significantly different from the originals.

With this caveat in mind, I return to the Sroufe-Dodson marriage record as a possible reason why Don (Bob) needed to know the exact date that his divorce would be final. The sequence of these records leads me to strongly suspect that he wanted to marry again. The divorce decree was dated 30 April 1928 to become final in six months. Bob (Don) writes his letter from jail in mid-June 1928 and then marries in December that same year just weeks after the divorce had become final. I wonder if he was having trouble remembering which name to use? He was clearly going back and forth between his two aliases depending on which wife he was talking to.

The story gets worse and the aliases accumulate

Whether or not his marriage to Paula lasted is unclear. To date, I have not located any records that closely match for a Paula O. Dodson, 23, in Oklahoma or other surrounding states. If she truthfully stated her age, then she would have been born about 1905. Numerous attempts using multiple search strategies at Ancestry.com, Newspapers.com, Google and various historical society websites have yielded no results so far. After all of this searching, I can’t help but wonder if Don Sroufe had finally met his female match who was also using a false name. If so, it would be a most-welcome ironic twist to his story.

For the next few years, Don is just as elusive as Paula. No record has been located for either of them in the 1930 US Census. However, in January 1931, another and more disturbing record for Don appears. He is now listed in the Texas, Convict and Conduct Registers (see Figure 2). 4 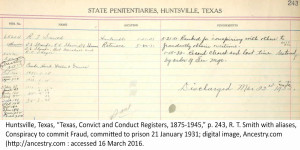 Figure 2. R. T. Smith and the long list of aliases.

Although the convict’s name is listed as R. T. Smith, the register also includes a list of his other known aliases. From this record alone, we learn that Don E. Sroufe was also known as – D. E. Stroufe, R. L. Shores, D. E. Shrouse, D. E. Shoufe, Bob Marshall and R. L. Shoyer. 5 That means that by the time that Don was 31 years old he had used at least eight different names besides the one given to him at birth. It does look like he used some form of his birth name as template for many of the aliases. He also began using various combinations of R. L. (Robert Lee and Bob). However, the actual name he was using when convicted and sentenced to the state penitentiary, R. T. Smith, might be an indication of a more experienced criminal. In using R. T. Smith, his name becomes far more common than Sroufe and his identity more vague and far more difficult to track.

Thankfully, I located another type of record used at the Texas State Penitentiary. This convict register was completed at the same time in January 1931 when R. T. Smith began serving his five consecutive two-year sentences for forgery (see Figure 3). 6

Amazingly, this is the first record that offers a physical description of Don Sroufe (a.k.a. R. T. Smith and others). According to the entry for convict #65624, we see that he was a short, 5 feet-6.5 inches, and thin weighing only 132 lbs. 7 His complexion was fair and he had blue eyes with blonde hair. My dad also had blonde hair. I guess he inherited from his father. 8

Both of these convict records document that R. T. Smith (a.k.a. Don) was convicted on 15 January 1931. Six days later, he entered the Texas State Penitentiary in Huntsville to begin serving his sentence. While in prison, he was disciplined once for conspiracy to fraudulently obtain overtime. 9 However, he was later cleared of the charge. For the next several months, he must have stayed out of trouble because his two-year sentence is shortened by almost 10 months and he was released (not paroled) on 23 March 1932. 10

Sadly, it didn’t take long for Don to get himself into trouble again. Another news article published in The Whitewright (Grayson County, Texas) Sun, dated  30 June 1932, tells about four men who recently escaped from the county jail. 11 Don Sroufe, along with three other prisoners, escaped by “sawing their way from their cell and pounding a hole through the outer wall.” 12 Doesn’t that sound like a scene from a movie?

The article goes on to describe each of the four men and what they had done to land in the Grayson County jail. In Don’s case, he had been arrested for “swindling over $50 and removing a mortgaged automobile from the State [Texas].” 13 It seems that he was still conning people out of money and now adding car theft to his criminal résumé. It also appears that he stopped calling himself R. T. Smith when he was released from prison in March because the article stated that it was “Don Sroufe,” who had been in jail. But, it is the final statement in the article that provides the proof needed to link Don Sroufe directly to R. T. Smith and all those other aliases. In this last sentence, we learn that “Sroufe had been liberated from the Texas penitentiary shortly before his arrest at Shawnee, Okla., on May 1, 1932.” 14

How does his story end?

Unfortunately, the jail break is the last record that I have been able to locate on Don Sroufe. For more than a year, I have searched and browsed all of Ancestry.com‘s record collections such as, US census records, the Social Security Death and Applications and Claims indexes, cemetery records, as well as more prison records. I’ve spent many entire days trying various Google search strategies with no success. I’ve conducted all of these unsuccessful searches looking for Don E. Sroufe as well as for every one of his eight aliases.

How does his story end? I don’t know. But I will continue searching for any record of him to bring closure to his life. And since searching did not yield any results, I am hoping that by sharing what I know in this blog may someday produce another clue. So I am casting this “cousin bait” into cyberspace with my fingers crossed.

8 Replies to “Don Sroufe, man of many aliases”